Film as an art form grew out of a long tradition of literature, storytelling, narrative drama, art, mythology, puppetry and shadow play. In addition, the technology of film emerged from developments and achievements much further back in human history. 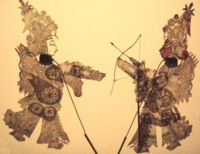 With possible prehistoric origin due to its occurring naturally, the camera obscura was used and described by Anthemius of Tralles,[1] and near the year 1600, it was referred to by Johannes Kepler and perfected by Giambattista della Porta. Light is inverted through a small hole or lens from outside, and projected onto a surface or screen, creating a projected moving image, indistinguishable from a projected high quality film to an audience, but it is not preserved in a recording. Tarkovsky, in Andrei Rublev, pays homage to this film precursor by including a camera obscura via a hole in the door of a medieval room.

Plays and dances had elements common to films, including scripts, sets, lighting, costumes, production, direction, actors, audiences, storyboards, and scores. They preceded film by thousands of years. Much terminology later used in film theory and criticism applied, such as mise en scene. Visual moving images and sound were not recorded for replaying as in film.

Shadow dancing, using projected light in combination with acting or dancing, is an ancient art in many world cultures, and includes projection from a light source. Puppetry, another ancient art form, shares elements with animation and claymation.

An earthen bowl found in Shahr-i Sokhta, Iran, and dating back to 3200 BC had five images of a goat painted along the sides. This is believed to be an example of early animation.[2][3][4] In 500BC Mo-Ti, a Chinese philosopher, pondered the phenomenology of inverted light from the outside world beaming through a small hole in the opposite wall in a darkened room. A century later, Aristotle wrote of watching an image of an eclipse beamed onto the ground through a sieve.

The earliest experiments with the camera obscura were made in the 6th century by Anthemius of Tralles, a Byzantine mathematician and architect (most famous for his work in the Hagia Sophia). He carried out experiments in optics, and used a type of camera obscura.[1] 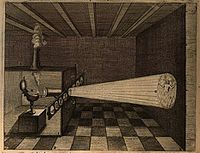 The pinhole camera, followed by the more advanced camera obscura, was described in detail by Alhazen in his Book of Optics (1021),[5][6][7] and later perfected by Giambattista della Porta. Light is inverted through a small hole or lens from outside, and projected onto a surface or screen. Using a camera obscura, it was possible to project a moving image, but there was no means of recording the image for later viewing. Leonardo da Vinci also described a structure that could produce the camera obscura effect and Reinerus Gemma-Frisius, a Dutch scientist, illustrated a large room built for the purpose of viewing eclipses in 1544. Johannes Kepler coined the term camera obscura in 1610, the same year that Della Porta perfected the camera obscura by using a convex lens.

Athanasius Kircher projected an image painted on glass plates with an oil lamp and a lens, his 'Magic Lantern' in 1671. Over a hundred years later, Étienne-Gaspard Robert began his revolutionary phantasmagoria show and developed the "Fantoscope", a magic lantern on wheels.

In 1740 and 1748, David Hume published Treatise of Human Nature and An Enquiry concerning Human Understanding, arguing for the associations and causes of ideas with visual images, forerunners to the language of film.

The theory of Thaumatrope induction was presented by Peter Mark Roget in 1824 in his paper Explanation of an optical deception in the appearance of the spokes of a wheel when seen through vertical apertures. This explained the concept called 'persistence of vision'. Two years later, the first of many gadgets to create the illusion of movement was marketed by John Ayrton Paris. The card, called the Thaumatrope, gave an optical illusion when spun. Michael Faraday also began to experiment with visual illusions at this time, creating a revolving wheel.

Moving images were produced on revolving drums and disks in the 1830s with independent invention by Simon von Stampfer (Stroboscope) in Austria, Joseph Plateau (Phenakistoscope) in Belgium and William Horner (zoetrope) in Britain. The Zoetrope, a.k.a., the Daedalum was a revolving cylinder which gave the illusion of motion to the pictures inside. Charles-Émile Reynaud developed an early animation device in 1877, which he called the Praxinoscope.

Other mechanisms followed: in 1832 Joseph Plateau created the Anorthoscope and Phenakistiscope; in 1833 Simon Stampler developed the Stroboscope; in 1853, Franz von Uchatius invented the Kinetiscope [sic] which projected moving drawings; in 1861 Samuel Goodale patented a hand-turned stereoscope device which rapidly moves stereo images past a viewer;[8] and in the same year Coleman Sellers II built the Kinematoscope - a series of stereoscopic pictures on glass plates, linked together in a chain, and mounted in a box. The simple and convenient flip book was patented in 1868 and has endured as a commercial product.

The crucial invention of celluloid was made in 1855 by Alexander Parkes, a substance he initially called Parkesine. This was marketed from 1869 by John and Isaiah Hyatt.

The first "moving picture" photographed in real-time, rather than consisting of a series of posed photographs, was created in the US in 1878 by British photographer Eadweard Muybridge. Under the sponsorship of Leland Stanford, he photographed a horse named Sallie Gardner in rapid motion by using a series of separate still cameras. The experiment took place on June 15 at Stanford's stock farm in Palo Alto, California, with the press present, and was meant to determine whether a galloping horse ever had all four feet off the ground at the same time. The cameras were arranged in a line parallel to the edge of the track and spaced 27 inches apart. Each camera shutter was triggered by a thread as the horse passed and each exposure was made in only one thousandth of a second.[9] Among the other uses Muybridge made of the results, he copied the photographed silhouettes of the horse onto a glass disc that could be used to project the images onto a screen with a device he called a zoopraxiscope, which was effectively the first movie projector. His innovative process was an intermediate stage toward motion pictures and cinematography.

Étienne-Jules Marey invented a chronophotographic gun in 1882, which was capable of taking 12 consecutive frames a second, recording all the frames on the same picture. He used the chronophotographic gun for studying animals and human locomotion. An early projector, along similar lines to Muybridge's zoopraxiscope, was built by Ottomar Anschütz in 1887. His Electrotachyscope used 24 images on a rotating glass disk.[10] In 1894 his invention projected moving images[11] in Berlin.

As a result of the work of Eadweard Muybridge and Étienne-Jules Marey, researchers in the late 19th century began to realize that motion picture capture and display was a distinct practical possibility.

File:Roundhay Garden Scene.ogv The Frenchman Louis Le Prince began work on such a project in the 1880s, while working in Leeds, England. Le Prince had been inspired by Muybridge's pioneering experiments, and he patented his first invention, a 16 lens camera, in 1887.[12] The first 8 lenses would be triggered in rapid succession by an electromagnetic shutter on the sensitive film; the film would then be moved forward allowing the other 8 lenses to operate on the film. Although the camera was capable of 'capturing' motion, it wasn't a complete success because each lens photographed the subject from a slightly different viewpoint and thus the projected image jumped about.

By May 1887,[12] after much trial and error, Le Prince was finally able to develop and patent the first single lens camera in 1888, leading to the birth of the modern motion-picture film over the next decade. Le Prince shot the first sequences of moving film in the world, what would become known as Roundhay Garden Scene, shot on October 14, 1888 in Roundhay, Leeds.[13]